I watched Disney’s award-winning movie “Frozen”  for the first time very recently with my Mum. She was loaned a colleague’s daughter’s precious, sole DVD copy of the animated hit movie. I knew a little about it, the well-known “Let It Go” song, and there was a blonde girl called Elsa in a blue sparkly dress; I knew nothing of the storyline.

Watching Disney movies as an adult is a COMPLETELY different experience.

In my mind, I placed “Let It Go” at the end of the movie as a ‘goodwill and strength defeats evil’ – type sing along; it is a stunning song with great lyrical sub-text about resilience.
I was a bit disturbed by the context of the song  – Elsa is singing about resilience and individuality, but at the same time she is building herself an ice castle to ice-solate (HAW HAW) herself from her sister and Kingdom. She feels her abilities are a burden and she needs to isolate herself to keep others safe in case she hurts them. There is a social stigma around magical abilities and she feels she can’t be part of her own Kingdom any longer. Elsa was not the protagonist I thought she was (she does come good, I digress).

I took my feelings to Facebook, saying that I had finally watched “what all the fuss was about” and was a bit disturbed by the narrative context of “Let It Go”(along with wanting my own personal flurry and perhaps a Reindeer!), and rated the film 5/10. [I’m not a huge fan of Disney movies, and Frozen was subject to a lot of hype]
I received some fascinating answers from my peers (my 20-somethings friends):

I think it is important for kid’s movies to address social ‘issues’ – societal and personal.

Elsa has been conditioned to feel anxious about her powers by her parents – “conceal, don’t feel”. Even though this attitude could have been instilled with good intention (because frantic emotion exacerbated her powers when she couldn’t control them), Elsa grows up feeling that isolation is the best management for her powers. She even endures the grief of losing her parents alone (as does Anna); while this helps her manage her powers, she develops a social agrophobia (alluded to clearly in the song about opening up the castle, on Elsa’s coronation day). 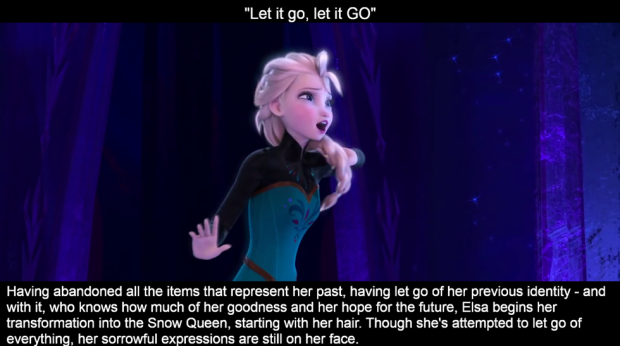 Not all of Frozen has an introverted, self-shaming, anxious sub-text. I guess I saw for the first time since amy own childhood, that Disney movies have changed.

Maybe Disney movies haven’t changed that much since the late 1990s?

I suggested, as my friend N alluded to – “Frozen” could also be interpreted as a journey of self-mastery. If you really wanted to over think it like me, Frozen deals with social stigmas, self-deprecation, isolation, a ‘broken’ family (broken by grief and isolation), and genuine acts of love (I’m looking at you, Prince Hans of Idon’tcarewhere!) not just being restricted to romance – acts of true love can be between family and friends too!

Thinking broadly, you could substitute anything into the social stigma metaphor – mental illness, anxiety, sexual orientation, a mental or physical disability, having a sexually transmitted disease/infection, religion or ethnicity etc. People can feel anxious for many reasons, and feel it is better for them to be isolated, for fear of verbal backlash and/or negative perceptions that exist with regard to what makes them ‘different’. Elsa was chased out of town and called a witch, and had assassins sent after her because her powers were perceived negatively. Just as I understand the Disney movies I watched as a child differently now – will these kids who are glued to “Frozen” now, see what I see when  they inevitably re-watch it when they’re 20?
Or am I just an exceptional case?

As a Gen-Y in her 20s, this is the time where we, as people, are developing our understanding of the world, and are encountering a broad range of issues for the first time…

…..In fact, does that ever really finish, our quest to understand the world, and develop our own opinions?

“Let It Go” is an important song, not just as an movie-made masterpiece, but as part of Elsa’s journey of developing resilience. I found her journey towards self-mastery to be quite an accurate portrayal (because sometimes dramatic licence sneaks in!). The more I think about it, I’m glad kids are watching this movie over and and over and over! Simba, Ariel, Quasimodo, Belle and Aladdin all go on a similar journey when you think about it (as much as I do).

Disney movies, all kids’ movies and TV shows have such an important role to play in helping kids understand our world today.

Some words will always be priceless, no matter what age you are.. 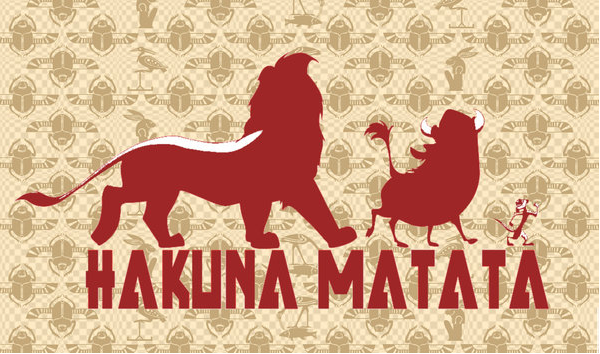 Let me know your thoughts, I hope you enjoyed reading as much as I enjoyed writing!